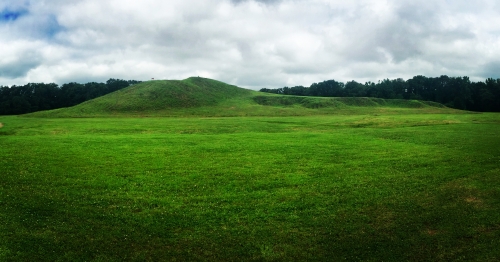 The North American Archaeology Lab is located in room 329B, just across from the main Anthropology Department office. The Lab is directed by Dr. Meg Kassabaum and staffed by Penn students through work-study, volunteer, and paid lab assistant positions. If you are a student interested in gaining research experience through the lab, please contact Dr. Kassabaum at mkass@sas.upenn.edu. Research opportunities are available through all of the projects listed on this page and can be tailored to a given student’s interests.

As the flagship project in North American Archaeology at Penn, the Smith Creek Archaeological Research Project (SCAP) was launched in 2015 after preliminary excavations in 2013 as part of the Mississippi Mound Trail Project. The project focuses excavations on the Smith Creek site in Wilkinson County, Mississippi, which consists of three earthen mounds surrounding an open plaza. The site was constructed primarily during the Late Woodland, Coles Creek period (AD 700 – 1200), but heavy occupation continued into the subsequent early Plaquemine period (AD 1200 – 1350). The transition from Coles Creek to Plaquemine marks a period of major transition in the American South -- from the construction of smaller burial mounds to large platform mound-and-plaza centers, from largely egalitarian to hierarchical sociopolitical organization, and from hunting and gathering to corn agriculture. SCAP explores the relationship between these important changes through archaeological excavation and analysis of the recovered materials.

Research on the American Section Collections in the Penn Museum

School of Arts and Sciences, 2016, “An Archaeobotanist Blooms from the Classroom to the Field”

Philadelphia Inquirer, 2017, “The Mystery of the Mound - Penn digging into ancient curiosities”