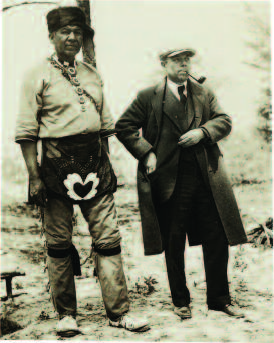 The Department of Anthropology at the University of Pennsylvania has a robust and noteworthy history.  With its start in the late 19th century, the department emerged as one of the earliest examples of an academic program dedicated to the comprehensive and professional scholarship of what it means to be human. Expansion of the department in the 1950s and 1960’s established its reputation as a premiere hub of anthropological scholarship, a legacy that the department continues to uphold to this day.

Boasting a four-field program that explores humanity across archaeological, linguisitc, biological, and cultural perspectives, the department's present approach has been shaped by an exceptional lineage of anthropological scholars including noted linguist Edward Sapir, ethnologist Frank Speck, and archaeologist Froelich Rainey, among others.

Over the years, the department has continued to build upon the work of its pioneers to chart new paths for understanding what it means to be human.

We invite you to learn more about the department’s storied past by following the link below!

A Short History of Anthropology at Penn by Igor Kopytoff