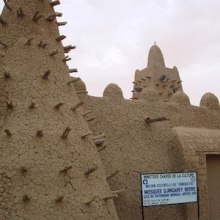 By positioning communities in a leading role, the Penn Cultural Heritage Center reframes the preservation of cultural heritage within a context of social, political, and economic development. We demonstrate and disseminate our strategy through field projects, research, engagement in public policy, and public programs that emphasize the centrality of community priorities for successful outcomes.

This large scale heritage preservation and community development project seeks to understand the 19th century Maya rebellion (also called the Caste War of the Yucatan) as well as the 21st century Tihosuco community and the nature of its modern identity. In addition, the project focuses on the development of tourism infrastructure as the basis for future economic development.

The Wáyk’a Heritage Project is a collaborative initiative between the Penn Cultural Heritage Center and the descendants of the Shasta Indian communities from the Klamath River basin of northern California. The project has three aims: to understand how Native American communities have lived in the Upper Klamath region, to facilitate cultural and linguistic revitalization, and to act as a platform for advancing tribal political interests in community preservation.

Safeguarding the Heritage of Syria and Iraq (SHOSI) Project

The PennCHC supports Syrians and Iraqis in their efforts to protect cultural heritage in conflict-affected areas through the Safeguarding the Heritage of Syria and Iraq (SHOSI) Project. Alongside the Smithsonian Institution, the American Association for the Advancement of Science, the International Council of Museums, and other organizations, the Penn Cultural Heritage Center has spearheaded efforts to work directly with Syrian and Iraqi archaeologists, museum professionals, and conservators who are working to protect endangered sites and collections in their care in often desperate conditions.

The PennCHC is engaged in research about why, when, and by whom cultural heritage is targeted during conflict. Consisting of researchers from over 17 international organizations and coordinated by the Penn Cultural Heritage Center, the Conflict Culture Research Network is poised to examine why we are now seeing an upsurge in the deliberate destruction of cultural heritage in contemporary conflicts.

In the 2016-2016 fiscal year, the PennCHC worked with over 70 interns and volunteers to collect data about museums around the world and compiled this information into the Cultural Repository Inventory. This inventory represents the first geospatial list of museums globally.

To learn more about the PennCHC's exciting initiatives and projects, explore it's website!

Brian I. Daniels
Director of Research and Programs
danielsb@sas.upenn.edu
2157464475