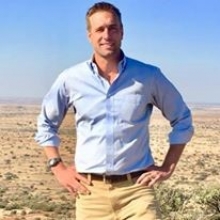 Dr. Leader is an archaeologist interested in a wide range of transmission of cultural tradition and behavior as found in the material culture record.

His research interests include hominid behavior and cognitive abilities as found in the stone tool record of South Africa. He excavates sites in central South Africa which yielded thousands of stone tools that display high levels of complexity in their manufacturing process. These sites, along the Vaal River basin, have been dated with cosmogenic nuclide burial dating from 1.7 Ma to 1.2 Ma. Looking at the technological changes through this long sequence of time gives insight as to how social traditions and cognitive abilities of these hominids transformed during this time period. The careful production of highly standardized and localized Victoria West prepared cores into the archaeological record displays a unique cultural indicator of the hominids living in this region at this time period. This Victoria West core technology could be argued to be a visible record of early social traditions or even cultural distinctions.

Dr. Leader’s earlier stone age research now extends into the Namib desert where his team is investigating the earliest hominins occupations of this arid/hyper-arid landscape.  The project focuses on the technological and behavioral adaptations that hominins made to successfully move into marginal desert environments during early periods.

In the mid-Atlantic, Dr. Leader is a PI of two research projects of colonial America.  The first is excavation of the First Baptist Church of Philadelphia, known as the Arch Street Project.  In 2017 developers in Old City Philadelphia uncovered a previously forgotten burial ground that had been active from 1702-1859.  The resulting excavations have recovered almost 500 sets of skeletal remains and associated artifacts.  Dr. Leader is the principle archaeologist conducting analysis on the artifacts.  While many of the artifacts can be linked to trade with England during the 18th and 19th centuries, the wide variety of symbolism add new information to our understanding of cultural exchange of an ancestrally diverse burial ground.

The second is a colonial project started by Dr. Leader which now includes researchers from many fields of expertise.  Built around 1720 the William Green Plantation’s first permanent house still stands in Ewing NJ.  Excavations around the house have yielded a large assemblage of 18th and 19th century household products.  Archival research is confirming the claims of the house having been used as a billet by General Washington’s cavalry during the Revolutionary War.  Recently, new evidence has emerged on the presence of indentured servants at the plantation which is informing research direction.

Dr. Leader’s research has been featured in on the cover of the science section of The New York Times, Archaeology Magazine, and Smithsonian Magazine.  He has made appearances on the Discovery Channel’s Expedition Unknown and NPR.

Ph.D., University of the Witwatersrand

MSc, University of the Witwatersrand