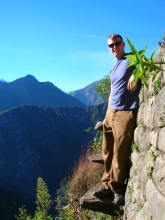 My area of interest is in the south-central Andes, and I have been working in Cuzco, Peru over the last few years.  Additionally, I have participated in projects in Cyprus, Connecticut (USA), Belize, Tiwanaku (Bolivia), Lurin Valley (Peru), and the Moche Valley (Peru).

My specific interests have shifted from the Late Horizon (Inca Period, 1400-1532 AD) earlier to the Middle Horizon (600-1000) in central Peru over the last few years.  I want to try and better understand cultural and socio-political interactions between the Wari polity and populations outside of the Ayacucho heartland - particularly the ways in which Wari attempted to establish both political and ideological hegemony (in the Gramscian sense), if and how these attempts were resisted by different elements of local populations, and the process of interaction was mediated through material objects, architecture and landscape.  Being a "state" or an "empire" is not completely necessary for these types of political processes to occur, and for me, gaining a better understanding of the "nature" of complex polities during the Middle Horizon is a secondary question that can be approached through answering these questions of interaction.

On a broader, more theoretical scale, I am also interested in ancient political processes; the intersections between culture, society, ideology, materiality and sovereignty; social and cultural change; and integrating computers and archaeometric techniques with higher-level interpretation.

Assembling States: Community Formation and the Emergence of the Inca Empire