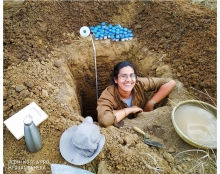 Dr. P. Ramya Bala completed her Interdisciplinary PhD in paleoclimatology at the Centres for Earth and Ecological Sciences in the Indian Institute of Science, Bengaluru, in September 2016. She worked on a carbon-rich archive called peat which is a result of accumulating vegetation trapped in an anoxic environment. She dated the peat profile using radiocarbon concentrations (Accelerator Mass Spectrometry). She utilized proxies for climatic and vegetation information such as stable carbon and oxygen isotopes (Isotope Ratio Mass Spectrometry), inorganic geochemical indices (Inductively Coupled Plasma Mass Spectrometry), C/N ratios and Rock-Eval pyrolysis indices. Through her PhD she gained hands-on experience in radiocarbon pre-treatment and clean-lab sample digestion procedures and familiarity with all the instruments involved.

Ramya Bala’s Fulbright-Kalam fellowship aims to conduct a direct evidence-based understanding of past climate and vegetation in the Holocene in a tropical dry forest in India. While the Intergovernmental Panel on Climate Change (IPCC 2013) has been able to model the physical processes governing the climate system, human impacts are not integrated well. As a result, climate modeling for projection into the past, that tries to take Anthropogenic Land Cover Change into account is seriously hampered. The Landcover6k project aims to study land-cover change across the globe that is induced by climate, natural causes, and humans for the Holocene epoch and deliver this information to climate modelers. Ramya Bala will be working on an extension of this project in India using stable isotopes and radiocarbon and also get trained in palynological techniques at the host lab during her fellowship.