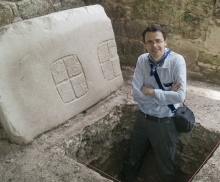 Simon Martin is a political anthropologist and specialist in Maya hieroglyphic writing, with a particular interest in the history, politics, and religious beliefs of the Classic Period (150-900 CE). Much of his core research focuses on the social and political organization of the Maya lowlands and reconstructing the network of hegemonic ties between polities.

In 2019-2020 he was on leave as the Jay I. Kislak Chair in the History and Cultures of the Early Americas at the Library of Congress, Washington D.C. In 2020 he also published "Ancient Maya Politics: A Political Anthropology of the Classic Period 150-900 CE" with Cambridge University Press. In 2021 this book won three prizes at the Association of American Publishers PROSE Awards: judged to be best in the category of Biological Anthropology, Ancient History, and Archaeology, then best in the Humanities section, and lastly the top prize of the R.R. Hawkins Award.

His earlier co-authored book "Chronicle of the Maya Kings and Queens" is now in its second edition (2008) and has been translated into five other languages. As part of co-developing the exhibition “Courtly Art of the Ancient Maya” for the National Gallery of Art, Washington D.C. and Fine Arts Museums of San Francisco, he wrote its accompanying book together with Mary Miller (2004). He has also authored 41 articles and book chapters, 20 co-authored pieces, and 12 electronic publications.

Simon conducted epigraphic fieldwork at Calakmul, a UNESCO World Heritage Site set within the largest biosphere in southeastern Mexico from 1994 to 2016. He currently collaborates with a project working at Ucanal in Guatemala. His work on Calakmul and its political network has been discussed in Science, Scientific American, National Geographic, Archaeology, and the Proceedings of the National Academy of Sciences. He has appeared in a number of television programs, including “Cracking the Maya Code” for NOVA/PBS and “Lost Treasures of the Snake Kings” for the National Geographic Channel.

He is also an Associate Curator and Keeper of the American Section at Penn Museum. He co-curated the exhibition “MAYA 2012: Lords of Time” there in 2012 and completed a full re-installation of its Mexico and Central America Gallery in 2019. Simon has taught and co-taught 200-, 300-, and 500-level courses for the Department of Anthropology and has supervised independent study courses for undergraduates. Most recently he was teaching "The Ancient Maya: Integrating Material, Text, and Image."